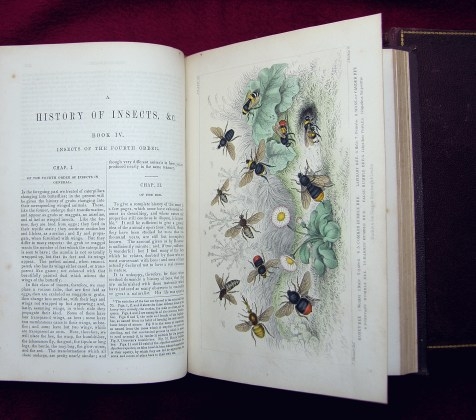 Book collecting has for years inhabited an inaccessible world of dark, musty shops open only to the erudite and the initiated This esoteric image may have been true once. but today it is a myth.

The business is thriving with new areas and genres emerging every year and new collectors, dealers and sources of supply popping up. In recent years the growth in book fairs has seen new collectors come in to whet their appetites, then move on to buying from rare book specialist. and auctioneers. The book collecting world has been dragged into the 21st century and is alive and thriving. But why collect ‘old’ books at all? Surely a new, more attractive and modern reprint of Ulysses by James Joyce would be preferable to a fragile old featureless copy of the book first printed in Paris in 1922?

If you do have a copy of the first edition, I would be glad to exchange old for new. The first edition, which was printed in Paris in 1922 by Shakespeare and Company, was limited to 1,000 copies, 100 of those on handmade paper and signed by the author.

A conservative estimate for one of those copies would be £10,000 to £20,000, but, given the newfound wealth in this country the estimates are best left in the land of fiction until one comes up for auction. A rare event indeed.

Books have always been soughtafter collectibles, the two most obvious attractions being size and price. It is easy to build up a library swiftly on a limited budget once you have chosen your area of interest and selected recognised and reputable sources.

You can choose what you want, pay for it and take it home, or even have it posted directly to your home if you are buying from a dealer’s catalogue. Rare booksellers and auctioneers are your best bet for advice and supply

It must be remembered that they are collectors themselves and thus should not steer you too far wrong. If you build up rapport with a dealer or auctioneer you will have a friend, instructor and confidant who will be only too willing to give you a call when something comes in that is in your area of interest.

Some of the general areas of interest are outlined below, but this is not a finite list, as there are subsections to nearly all subjects.

If a jacket was supplied with the original copy, it is a good addition if you are to get the best price. But don’t be put off purely by that.

As regards the author whether he or she is living or dead can have an effect. As with painters, recently deceased authors get a very bad deal

Finally, the binding is of cardinal importance. Some books are collected regardless of content purely because of the quality of craftsmanship and beauty of their bindings.

Most book dealers produce catalogues, so a phone call or a visit should be enough to get you started. There is only one specialist book auctioneer in Ireland.  Other auction houses sell books but on a smaller and less frequent scale.

Obviously with such a broad field to cover and space limitations, it would be impossible to go into any great detail at this point. In later columns. we will discuss the finer points of book collecting in detail.

But in general. remember that collecting books should be fun. Buy in your area of interest, read what you buy, and enjoy them for what they are.

The best way to learn is to ask the people who love book collecting. Before long you will have caught the bug. 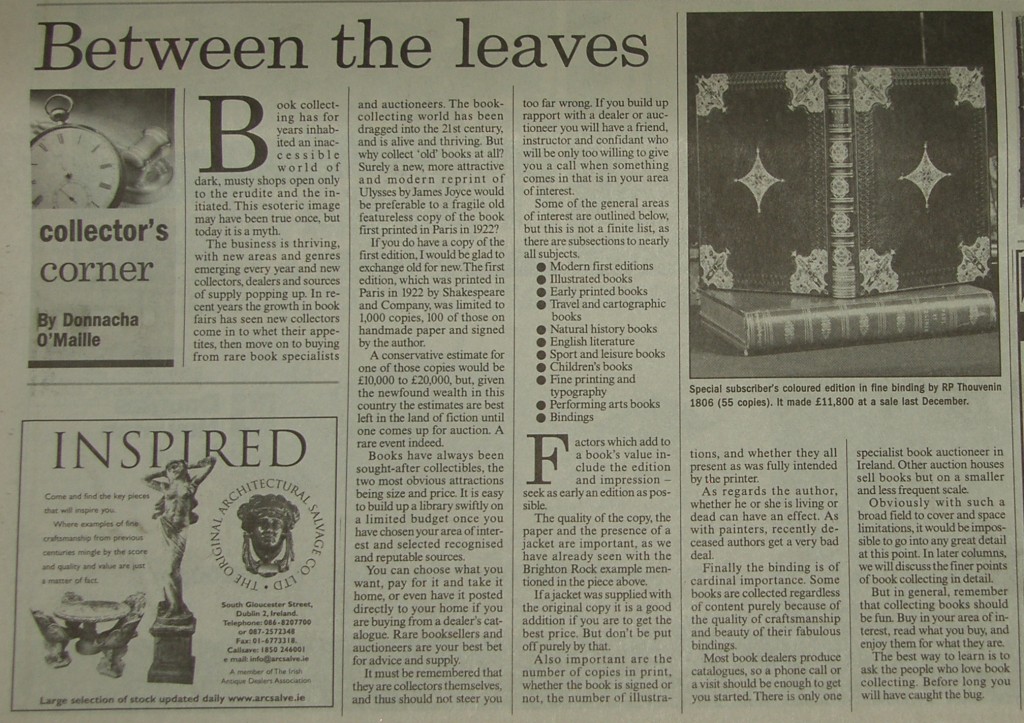