This article was first published in Collectors Corner, Oct 1st, 2000 in the Sunday Business Post

In case you hadn’t noticed from the masthead, today is the first of October. This is of no major consequence except for the fact that from now until the end of the year, we can expect to be inundated with those annoying adverts announcing the countdown to Christmas.

Not to be outdone we have decided that if you can’t beat them, you can at least get your say in first.

With only a little over ten weeks to go until December 25, those much-loved gift items, teddy bears, are a seasonally appropriate topic.

There are few objects which provide a more intimate link with the past than an old teddy bear or a cloth doll.

In good condition these souvenirs of childhood can be of far more than sentimental value.

Teddy bears, more so than other soft toys, have acquired considerable value as collectables of late, with the rarer ones changing hands for five figure sums.

While soft bears on all fours were made before 1900, it was not until around 1902 that the first ones appeared with movable joints and not until 1906 that the teddy bear got its name.

In 1902 US President Theodore “Teddy” Roosevelt, who was a keen hunter, appeared in a newspaper cartoon refusing to shoot a bear cub.

The cartoon go national attention in the US at the time and soon afterwards the bear cub was used in other cartoons featuring Roosevelt.

At the time soft toy bears were being imported from Germany in large quantities and they soon became popular with Roosevelt’s adult followers. By 1906 the toys had become known as ‘teddy bears’.

The first teddy bears looked fiercer than the cuddly teddies we are now familiar with, as their features were originally modelled on grizzly and brown bears.

But gradually their appearance changed to the furry creature that we know today.
This was due in no small part to a German lady called Margarete Steiff, founder of the Steiff Toy Company. Steiff, who was polio-stricken from an early age, began making underskirts for a firm in Stuttgart in 1877 as a means of gaining independence.

For some time Steiff bears failed to arouse much interest, but a US company placed an order for 3,000 of her bears at the Leipzig Fair in 1903 and the Steiff bear took off.

The fine quality of the bears has ensured that Steiff bears have become one of the most popular makes for bear collectors today.

Arctophiles, as teddy bear collectors are called after the Greek word arctos, meaning bear, will pay thousands and even tens of thousands of pounds for the rarer examples.

While Steiff bears can be identified by the small metal button in the left ear, imitation buttons are now being made so it may be useful to examine an authenticated button before buying.

The designs of the buttons have changed over the years and if they are in good enough condition can be used to determine dates. Prices vary according to age, colour, condition, maker and size.

Only bears in good condition, with their fur intact, and identifiable as being made by a recognised firm have kept or increased their values.

Unusual colours can command higher prices but rare black Steiff bears can fetch as much as £30,000 when they come up at auction though collections can be started from as little as £200 to £300.

This article was first published in Collectors Corner, Oct 1st, 2000 in the Sunday Business Post 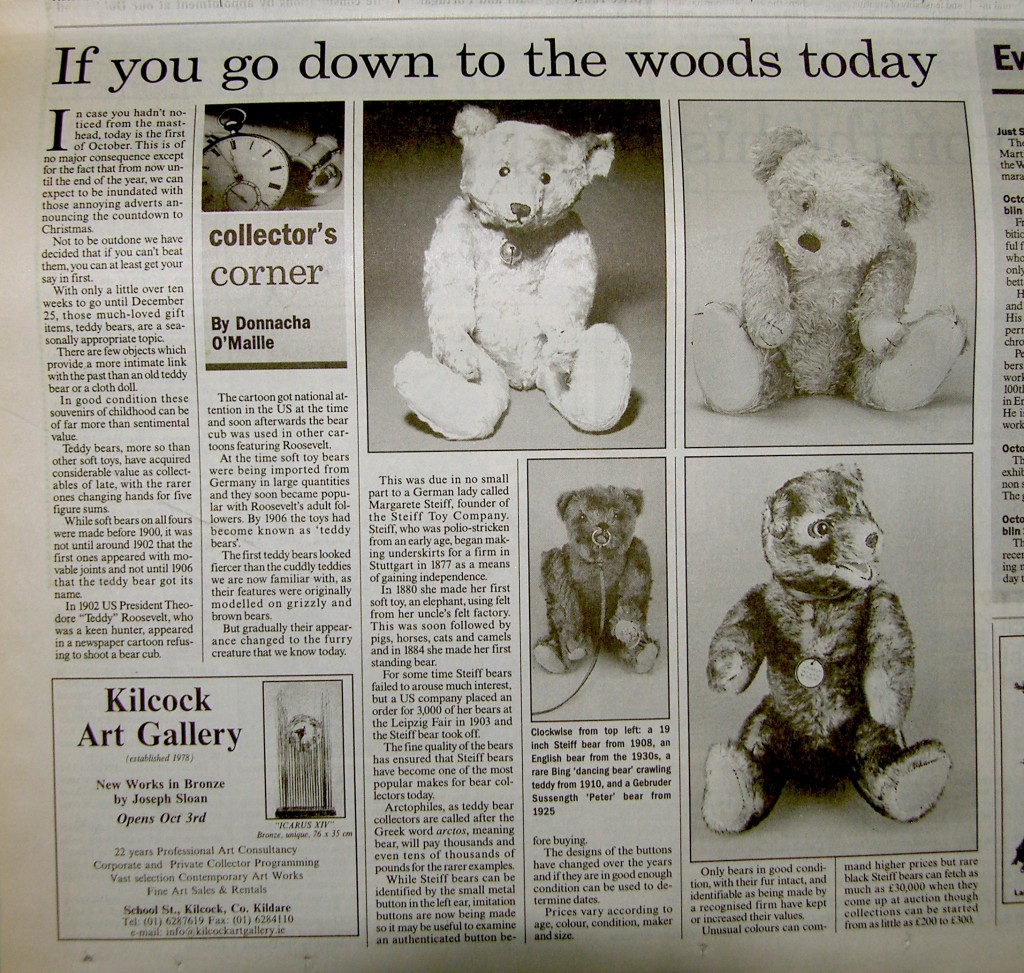